Last Friday, I puttered about after work–picked up the room, prepared materials for this week, chatted with my colleagues. Dark descended (which isn’t saying much since the sun set at 4:02 pm), and before I knew it, it was 6 pm. I gathered up my things, said goodbye to my one remaining colleague, and rushed out the door.

As I burst out of the building, I was startled to see that it had started to snow. I stopped.

“Oh, it’s snowing!” I called out, not sure if I was talking to myself or to my friend.

I stepped out into the cold, dark night and smiled, delighted by the unexpected scene. The parking lot lights shone on the few remaining cars.  Above the lights, the skies were dark and appeared empty, but within their cone of light, auras of snowflakes glowed. The wet, dirty parking lot was transformed. I watched the flakes appear as their paths took them from darkness into the light. Magical. I stood, transfixed, watching the spectacle. Twisting, turning, sparkling, falling. A grace of snow.

After a moment, I started toward my car, a new buoyancy in my step, and began singing,

I continued singing all the way across the parking lot. It occurred to me that someone else might be out there, might hear me singing, but I didn’t really care. It was the end of a long week, the snow was a vision of wonder, and I was heading home. It was definitely a night for singing. 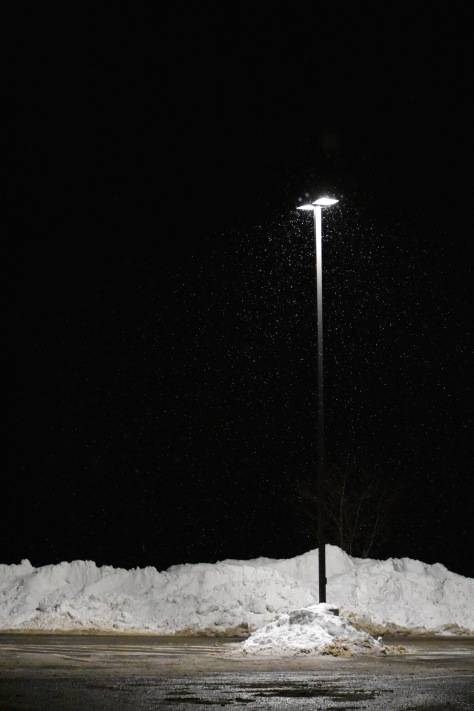