It’s March 15th and it’s snowing.  I live in Maine and that just happens here.  I usually don’t mind snow in March and April because I know it’s ephemeral in nature.  However, this year, with feet of snow still waiting to melt, this snow seems like it’s adding insult to injury.  To top that off, it’s an indecisive snowfall—the flakes float and whirl, up, down, and around.  They’re not even doing anything!  I know—I’m contradicting myself here.  I really don’t want snow, but if it’s going to snow, it might as well snow, dang it!

So, in a move to mitigate my snow-induced irritation, I head to the kitchen to make soup.  There’s nothing better than a pot of hot soup simmering on the stove on a snowy(-ish) day.  Today’s soup du jour will be Carrot Ginger.  This time, in a burst of daring,  I’m throwing a few parsnips in as well.  Take that,  Snow!  As I peel, slice, grate and chop, a pile of sliced carrot, onion and parsnip, vibrant orange and sunny white, grows on my scarred wooden cutting board.  I feel a bit better already.

Within half an hour, the aroma of simmering soup fills the house— Lots of onion with sweet overtones of carrots and parsnips, spicy ginger, and a nuance of fresh orange.  Inhaling that tempting, nutritious medley, I feel my mood slip into a gentler, happier place. 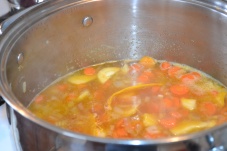 For the finishing touch, I puree the soup —softened vegetable chunks swirl into the broth in a delicious alchemy, transforming into a velvety amber elixir.

Outside, the accumulated snow remains and those directionless snowflakes are still present.  Inside, I ladle a few spoonfuls of soup into the bowl and scatter a few pieces of scallion atop it all.  Ahhhh!  Soup’s on at my house.

7 thoughts on “The Transformative Powers of Soup”