Maine summers have delightfully long days, but with the sun rising shortly after 5 am in July, it’s tough to get outside in time to greet the dawn. For some reason on Saturday morning I woke early and was immediately motivated to get up and out. After making my coffee, I drove down to the town landing then walked across the small park to the bay. The air was dense with moisture and mist drifted across the water. River flies swarmed in masses, emitting an audible hum. I walked down the gangway and onto the dock, feeling its soft roll under my feet.

Moving forward, I sat down on the smooth planks, feeling the damp seep through my dress, sipping my coffee, and watching the sky lighten. Fish jumped occasionally, a few with startlingly large splashes, and birds called back and forth. Every now and then I took a picture.  Water, sky and a sunrise are a pretty unbeatable combination, and it had been too long since I’d enjoyed that rejuvenating trinity. I breathed in the serenity of it all.

I turned quickly. An older gentleman with a large camera slung about his neck was walking toward the dock. “Oh, Hi!” I said, standing up.

“I didn’t want to startle you,” he said, approaching. “Are you a photographer or a birder?”

We talked softly of the beauty of the morning and the bay and of birds we’d seen recently. I told him about the pileated woodpecker that was visiting my suet feeder and recounted my morning sunrise with a heron last fall. He shared tales of a visiting yellow warbler and an indigo bunting. He told me about a local beaver dam and confided that after weeks of trying, he’d finally gotten a couple of good shots of the beaver. He confessed that he had 28 bird feeders in his yard. 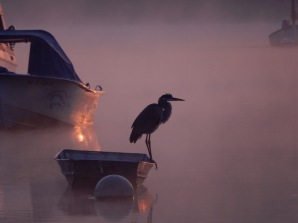 Fall sunrise with a pelican 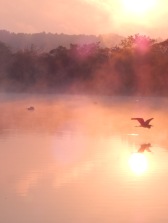 “I’m Roger,” he said, after we’d talked for a few minutes.

“Well, Molly,” he said, “I’m going up around the corner. There’s a spot I know there where I usually see some birds. I saw two herons there the other day.” He paused then continued, “I just wanted to say hello. Have a nice day.”

“You, too,” I said. He walked away and I turned back to the water. The sun had continued its ascent and the clouds glowed. I breathed in the serenity of it all.

It was going to be a beautiful day. 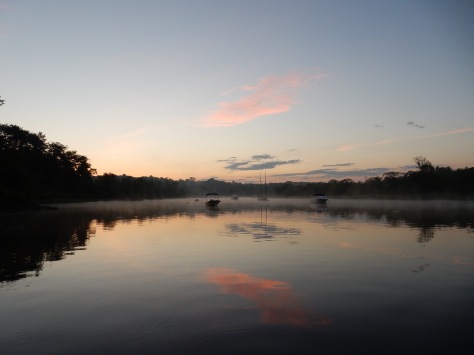