I woke at about 2 am on Saturday morning. Unfortunately, that isn’t too unusual these days. Knowing that attempting to fall back sleep was futile, I got up. After a few hours of this and that, I sat on a chair in the family room, gritty-eyed, vaguely unsettled and idly contemplating napping. The overhead light was on but it felt like too much effort to get up to turn it off. Instead, I pulled my hood over my head to block the light and closed my eyes. Within a minute the new “kitten” (8 months old) reached her paw under the hood and batted at my face.

“Stop it!” I grumbled, pushing her away.

She responded with a swat to my nose. Apparently, she thought this was the best game ever. She pounced on my head and repeatedly jabbed under my hood. After a few more rounds, I gave up on napping and pulled off the hood. What should I do now?

It was still dark outside. I glanced at my watch–5:15 am. Hmmm… What time does the sun come up these days anyway? My logy brain suddenly clicked up a notch.  Hey, I might be able to make it down to the beach to watch the sunrise! Moving the cat, who had continued to walk on my head and shoulders, I got up and opened my computer. A quick check showed that first light was at around 6 am and sunrise at about 6:30. Bonus–it had been low tide at 4:40, so the tide would still be out. If I leave by 5:30 I can make it! Suddenly energized, I got dressed, bundled up and headed out the door.

As soon as I stepped outside into the crisp morning air, I knew I’d made the right choice. The horizon was etched in crimson. With the moon nowhere in sight, the sky was a deep velvet blue punctuated with a few brilliant stars (or  planets?).  I drove east, watching the sky fade slowly from red to orange and then yellow, admiring the dark silhouettes of winter-bare trees. On the peninsula, estuaries reflected the growing light, meandering through the marshy tidal lands. As I finally pulled around the corner to the beach entrance, a bushy-tailed fox loped across the road, a rippling silhouette, and vanished into the brush. I parked and walked toward the beach. As I walked up the path, the sky ahead glowed. Then, the path opened up and the beach lay before me in all its glory. The sun-lit horizon stretched before me. No one was in sight. I was transfixed. 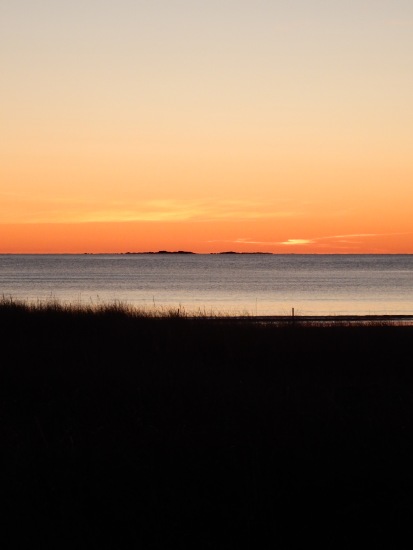 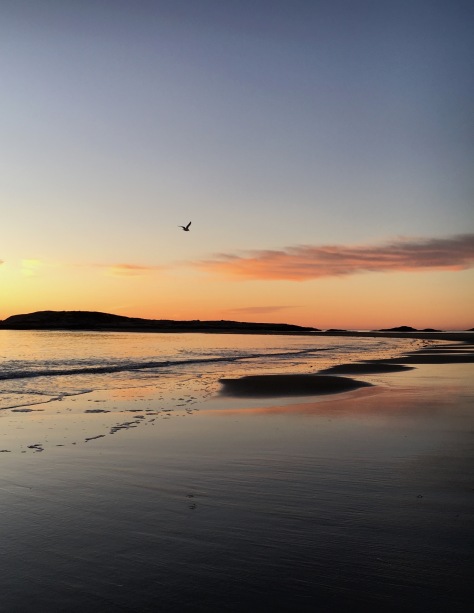 Mesmerized, I walked and watched the light show shift and change until the sun finally peeked over the horizon. Then, for the next hour or so, I wandered along the beach, taking photos, collecting sand dollars, examining the drift wood and admiring the amazing sand patterns. The combination of sunrise and beach time worked their magic on me and left me filled with awe at the wonders that surround me. In the words of the amazing Mary Oliver,
“Every day
I see or hear
something
that more or less

kills me
with delight…”

6 thoughts on “Sunrise at the Beach”