March 2018 SOLC–Day 25
A huge thank you to Two Writing Teachers for all that they do to create an amazing community of writers and a safe, welcoming space to write, learn, share and grow.
http://www.twowritingteachers.org 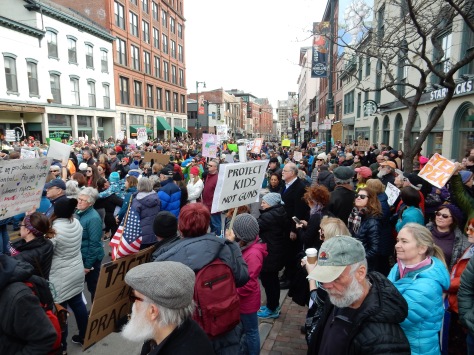 I turned awkwardly in the crowd, and there was Cindy–friend, colleague and fellow slicer (Mainer in Training). We were in the midst of hundreds and hundreds of people gathering for the March for Life in Portland, Maine. And yet she’d seen me. Amazing! Both of us were on our own, feeling that it was important to add to the numbers, to make a statement with our presence and participation. As the crowd grew, we chatted, talked about our shared concerns, read signs together and marveled at the turnout.

After a while, at some invisible signal, a cheer rose up and the crowd surged forward, banners high. We marched down Congress Street with thousands of others. A sea of peaceful protest.

Why did I march? I marched for our children because I am heartsick over the growing number of lives lost and our inaction as a nation. I marched because I hoped that a show of solidarity would elicit a meaningful national response and common sense changes in gun control laws. I marched because I’m angry and disgusted that politicians have abdicated their responsibilities. I marched because I was determined to stand up against the insanity.  Because I can’t accept that our country’s primary response to gun violence in schools is to have lockdown drills and bulletproof backpacks. Or armed teachers. I marched because I don’t want to have another child say to  me: “You know why I did so good during the drill? I was really quiet ’cause I didn’t want anyone to shoot me.” 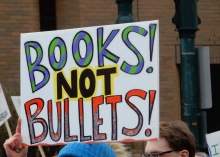 As we marched past the First Parrish Church,  bells began to toll, loud and clear in the chilled air.

“Are they ringing because of the time?”

We checked. It was 10:46. No, it wasn’t the time. The bells were tolling in solidarity with the marchers. The clarion call of those bells rising into the air above us packed an emotional wallop. Tears rushed to my eyes.

After I blinked them away, the next thing I saw was a young child in a stroller. A sign was strapped in before her. “Will I Be Next?” it asked.

I couldn’t take a picture.