I’ve been wanting to write a found poem for a while. Then recently, an Atlas Obscura article appeared in my Inbox. It was all about listening to the noises that forced rhubarb makes when it grows. What?! Yup. You read that correctly. When forced to grow in the dark, rhubarb grows up to an inch today and makes audible sounds as it grows. Take a listen.

Crazy, right? Who could resist the urge to write a poem about that? Not me! I was utterly entranced and once I read the accompanying article, I thought a found poem would be just the ticket. 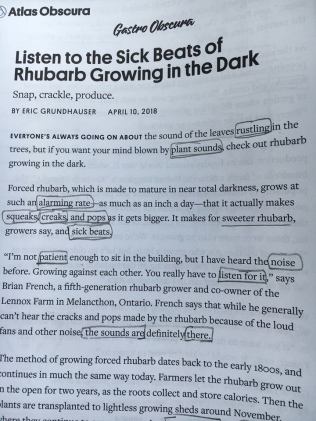 Rhubarb Growing in the Dark

Rustling
plant sounds
alarming rate
squeaks, creaks, and pops
sweeter rhubarb
sick beats
patient noise
listen for it
the sounds are there
out of season
in the dark
deep red stalks burst
distinct popping
squeaks and creaks
right tight to one another
sounds stand out
turn all the power things off
sit
relax
listen

a found poem inspired by an Atlas Obscura article, “Listen to the Sick Beats of Rhubarb Growing in the Dark” by Eric Grundhauser

Then ( because how often do you get to write a poem about rhubarb?), I had to write another poem.

Snap!
Crackle!
Tart red juicy stems
Pop!
forced to grow in darkness
cramped and crowded
They gripe, groan, and grow
with audible pain
a chorus of complaint
or…
could this be a song?
Perhaps they rejoice
stretching their stalks
celebrating the season
nudging into neighbors
jubilant in their growth
singing a song of rhubarb-spring

Note: In a happy little moment of serendipity, my poems meet two Poetry Month challenges today. “Rhubarb Growing in the Dark” meets Georgia Heard’s prompt for a Found Poem on Renee LaTulippe’s Poetry Month Challenge at her blog, No Water River. “Rhubarb-Spring”  accepts Amy Ludwig VanDerwater’s invitation to write a “Title From The Text” poem in which you take a title from the text of your poem after you have written it.