Part 1 describes how I took an injured fledgling in.
Part 2 ended with me debating about whether to release the bird before talking to an expert.

Hoping for a happy-ending story, but feeling a bit guilty for proceeding without expert advice, I picked up the box and carried it outside. (By the way, I have a hard time explaining why I didn’t wait. I’m kind of embarrassed. I think I convinced myself the bird was suffering in the box and ready to soar into the sky.  If I were reading this scene in a book, I’d be yelling at the protagonist–“Don’t do it! Just wait!” But somehow I managed to drown out that little voice in my own mind.)

Kneeling beneath the birch tree, I opened the box and tilted it slightly toward the grass. In an instant the bird had hopped out. It flapped its wings.

“Come on, little guy! You can do it!” I said, stepping back to give it a bit of space.

Instead of flying though, the bird hop-flapped across the driveway and the yard until it reached the shelter of the trees. 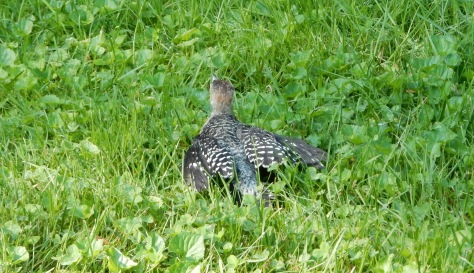 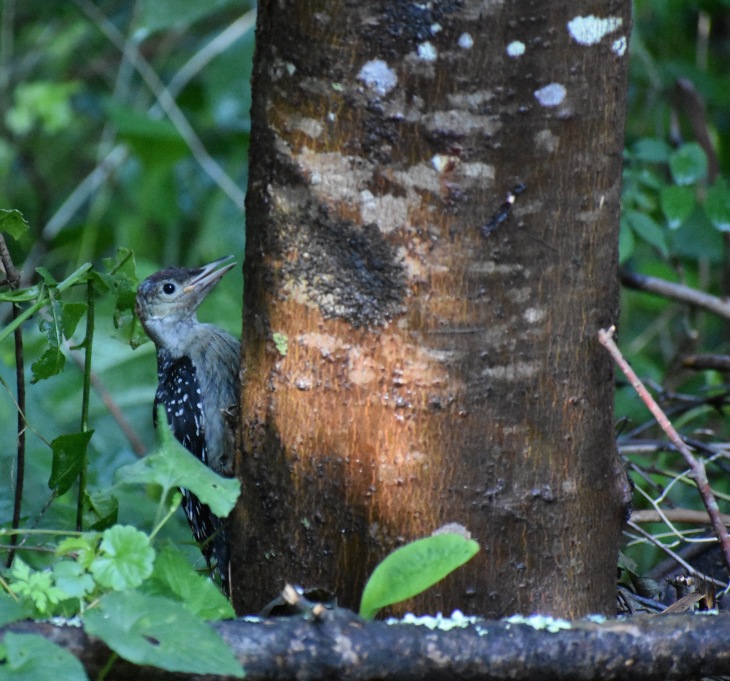 It then hopped on to a tree and started climbing. Ok, Yes! This might work. I was feeling cautiously optimistic. Until… a few inches up the tree, the bird stopped moving.
“Come on!” I encouraged the bird. “You can do it! Just keep on climbing!” After a few minutes it was the clear that the bird was not going to climb higher.  I decided to give it some space and check back in a few minutes. I walked back inside and checked my phone. Sure enough, there were not one, but two messages on my phone from Avian Haven.

Ugh. I should have waited.

Feeling guilty, I called back. Again, I got the recorded message. This time as I left my message, a call beeped in. Avian Haven! I answered, relieved to finally speak with an expert. In a garbled gush, I confessed to releasing the bird and asked for advice. The volunteer was kind and reassuring, but based on what I described, she wondered if the bird might have a fractured wing. Apparently birds can still flap with a fractured wing, but aren’t able to fly.

While talking to her, I walked back out to check on the bird. It was still a few inches up from the base of a tree. After discussing options, we agreed that I would try to capture it. Then if I could recapture the bird, she would get me in touch with a nearby volunteer who was already planning to drive it up to the center later that day.

I lined the cat carrier with an old towel (No, birds can’t smell. I’d asked.) and per her instructions, grabbed a soft, old T-shirt. This was going to be interesting. I approached the edge of the yard and put down the carrier. The bird was right where I’d left it. I slowly stepped toward the tree and the bird scrabbled around the trunk and out of sight.

I continued a run of reassuring comments, but each time I approached, the bird scuttled to the opposite side of the tree trunk. It peeked around the edge of the trunk, eyeing me with suspicion. We moved back and forth. Back and forth. Eventually I had to laugh–that eye!

But even though I saw the humor in the situation, I was increasingly worried. How am I going to catch this guy?  Along with that worry came the weight of responsibility. I should have waited to let him go.

After a bit of thought, I carefully gathered the T-shirt in one hand and reached my other hand high around the tree trunk to grasp it. I couldn’t see the bird now, but I slowly lowered the shirt toward where I hoped the bird was. With a loud shriek the bird dropped off the trunk and started hopping away in the dense underbrush. Great! I pursued, maintaining a flow of one-sided conversation with the bird (“Come on! I’m trying to help!”) and ultimately, after some creative underbrush maneuvering, low-level cursing, and good luck, within a few minutes I managed to capture it.

When I lifted it up, holding it within my T-shirt, it immediately started shrieking again. Oh, no! Am I hurting it?  I held my hands cupped around the bird, careful not to exert any pressure, but determined to keep it within my grasp. Wow! What a racket! I looked overhead warily, expecting irate bird parents to dive bomb me in response to their offspring’s clear distress. Then, quickly and gently, I deposited the bird in the carrier.

Success! Now to get the bird to Avian Haven!

5 thoughts on “Chronicle of a Bird Encounter: Part Three”