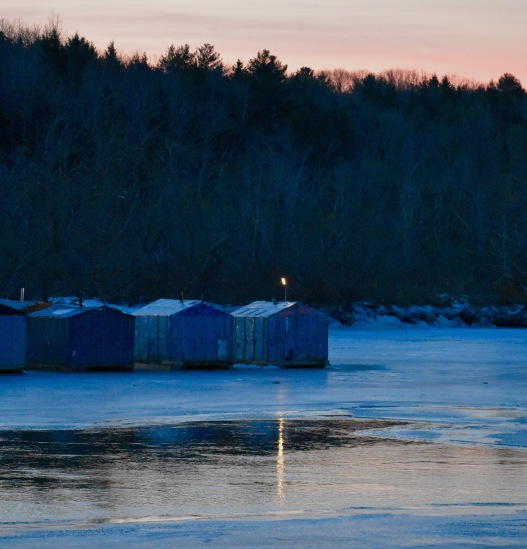 It all started about a year ago at the Ice and Smelt Festival. For those of you who don’t  know, smelt are a kind of fish and smelt fishing is a cherished winter tradition in many Maine communities. Our town has been celebrating ice and smelting for a number of years now with a festival. For last year’s event, there’d been a “call” put out for any photos relating to smelting or winter in our small town.

I sent a couple of photos in and on the day of the festival, Kurt and I wandered into town to check out the exhibit. I was anxious to see if my pictures were included. Would they be “favorites”?

Once we arrived, my eyes went straight to the display of photographs. I scanned them quickly. Yes! There was one of my photos…and there was the other one! Both were on display. (upper left in the photos below) They had even been enlarged.

“Oh, Kurt! They’re here!” I enthused, grinning from ear to ear. I was absolutely thrilled to see them on the wall with my name below them. Tickled pink as my  mom would have said.

We lingered, admiring the photos, examining the historical information and enjoying the exhibit. I may have peeked one or two more times at my photos. As I wandered, I noticed a few fabulous pictures. After a bit, I realized that most of them had been taken by the same photographer.

“Oh, I love this one!” I said to Kurt, motioning for him to check out a stunning picture of our local landmark bridge. “This BB takes wonderful pictures! I wonder who he is.”

After a while, a man came into the gallery and introduced himself. It turned out that he was BB, the photographer of those fabulous photos I’d been admiring and also the curator of the exhibit. When I introduced myself to him, he said something along the lines of, “Oh, you’re Molly Hogan. I really liked your pictures. You should think about having your photos in a show down here. I’ve been looking to make more use of the gallery space.”

We talked for a little longer and at the end of our conversation, he suggested I contact him via Facebook. Kurt and I left to meander over to check out the smelting shacks.

I walked out the door in a bit of a daze, excited and wondering. Did he really mean it? I then preceded to pester poor Kurt with questions for a while. A long while. It might have gotten a bit repetitive, but believe me, it was exponentially more so in my own head.

“Do you think he meant it?”

“What do you think?”

“But do you think he really meant it?”

I went back and forth for a week or so. Maybe two. Contact him? Yes. No. Maybe. Back and forth. Forth and back.

But one of the joys of getting older is that it nudges me to push barriers. It may take a while, but ultimately, it does. I love taking pictures. I love sharing my photographs. If someone offered me an opportunity like this, why wouldn’t I contact them? What did I have to lose? Bottom line…if not now, when?

So, after a bit, I reached out via Facebook. I sent him a link to a recent blog post that shared my favorite photos of 2017.

A few weeks later, I followed up. And, via a long circuitous route, it has actually worked out. I’m so excited (in between waves of anxious nausea) to share that on February 1st, an exhibit of my photographs will open at our local gallery. 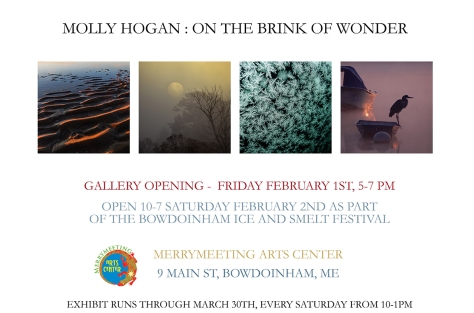 And it all started at the Ice and Smelt Festival…