Squatting on the concrete floor amidst the books, toys and odds and ends at our local Recycling Barn this weekend, I saw a fairly large cardboard box filled with small books. Curious, I reached over and pulled one out. It was a 2000 date book.  I pulled out another book. It was another small date book, this one dated 1987. I shuffled through the box, lifting out book after book. 2010, 1990, 1986…1941!

“Kurt, look!” I said, calling to my husband, “This box is filled with journals!”

He walked over to join me and I handed him a journal. He riffled through the pages, then handed it back to me. Always the historian, he asked, “How far back do they go? Are there any from the 40s? I wonder if they say anything about the war.”

I dug through the box and pulled out a few of the older journals and handed them to him. We paged through, reading a few entries aloud to each other. Kurt’s speedy skim through 1943 found no references to the war.

We kept looking. The writing was difficult to decipher at times, but a quick glance revealed that most of the information didn’t seem to be too personal. Each date had a comment about the weather and sometimes a few odds and ends notes about working, appointments, or outings.

I was fascinated by the diaries and had so many questions. Who wrote and kept all of these and how did they end up here? Based on the dates, it seemed safe to assume that the author had died or become incapacitated, but who decided to discard the journals? And at the Recycling Barn?  I was trying not to judge, but it felt a bit callous. While I could understand that the journals were no longer wanted, it seemed like there should have been a more thoughtful resting place for them. Even burning them would seem more respectful.

After a few minutes, I gathered up the journals we had pulled out and returned them to the box.

“I have to take these home,” I announced.

“All of them?” Kurt asked. “Aren’t we trying to get rid of things?”

“All of them,” I insisted, standing up and hefting the box into my arms. “There’s a whole life in this box! And besides,” I continued, “I can always bring them back next weekend.”

Later that night, I emptied the box onto my family room floor and began to organize, sorting the diaries by year. 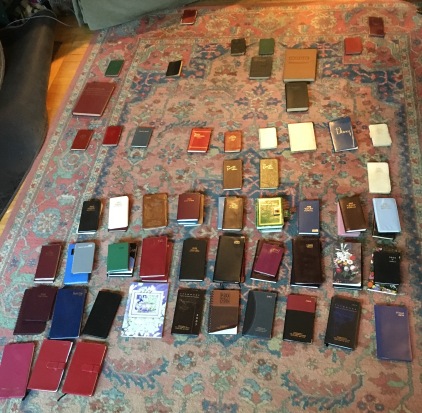 not quite done sorting!

There were 86 of them, ranging from 1923 to 2013. Most of them were labeled diary or diary/memos. Some years had two diaries, while one year had 3. I didn’t know where to begin and started leafing through random books. Part of me felt guilty –intrusive. Who was I to read another person’s journals even if they seemed impersonal? Yet, another part of me felt that reading them was almost paying homage to the author and recognizing the life these small diaries represented.

I soon discovered that, although most of the journals were written by one woman, there were several written by another woman. Also, while most days were primarily filled with everyday details, those entries were occasionally juxtaposed with startling news, personal tragedies, and world events.

I’ve barely begun to examine the journals, but my mind keeps returning to them over and over, wiggling thoughts about them like a tongue wiggles a loose tooth. Irresistible, yet slightly uncomfortable. There are so many mysteries within them. Certain names appear and reappear. Who were they? Spouses? Children? Friends? How did the two women know each other? Were they related? Why were their journals mixed together? Why are there so few in the 1970s, but the 60s were almost intact? Am I being nosey and invasive by reading them? And ultimately, what should I do with them?

Here are a few excerpts:

“August 1943
Wednesday 4 In hospital from 10:30 to 3:30 when Dr. Mixter (?)  told me he found large brain tumor and removed it all and it wasn’t malignant. Thought she would be ok unless unexpected happened. Saw her at 7 pm and she knew me.”

Next to details about temperature and Sunday School, complicated world events and compelling personal experiences have been reduced to a summary sentence or two. Boughs and cones juxtaposed with bombs and war. I guess that’s about right. The mundane daily details of our lives coexist with the tragedies and the triumphs. A life can be encapsulated in a few sentences or paragraphs. Or even sometimes in a box full of diaries.

Update: After responding to Margaret, I realized I hadn’t specified that these journals were in the Swap Shop section of the Recycling Barn. I also hadn’t really thought that through myself. To clarify I didn’t dig through discards for something someone else thought was safely or privately disposed of (that would have felt really invasive!). The Swap Shop is filled with things that still have value, but are not of use to the current owner. The contents range from treasure to trash and are free for the taking. So, the books really weren’t thrown away or destined for recycling, they were offered up like an invitation. Hmmmm….