I would have said it was impossible.

The snail caught my eye while I was playing around with my camera in the front garden. It was on the edge of a bishop’s weed blossom, perched in what seemed a slightly precarious position.

Be careful, little one!

I leaned in for a closer look. 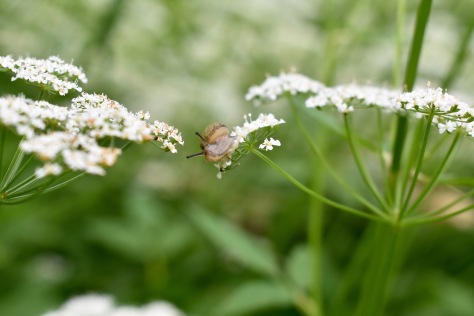 I’m not fond of the destruction snails can wreak in a garden, but I still think they’re kind of cute. As I watched this one, it stretched it’s head out toward a nearby blossom.

“Taking some time to smell the roses,” I thought, smiling. 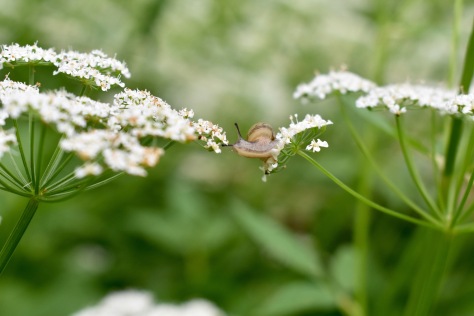 Then, as I watched, it stretched even further across the empty space toward the blossom.

I squatted down and prepared to watch the drama unfold.

It was hard to see exactly what was happening, but within a short time, the snail had somehow grasped onto some of the adjacent blossom,

What’s it doing? Is it eating? Is it using its mouth or its foot?

As I watched, it became clear that eating was not its primary intention at this time.

But the snail, far more intrepid than I, was clearly charting its trajectory forward, pulling itself closer to its intended destination. I watched, astonished. 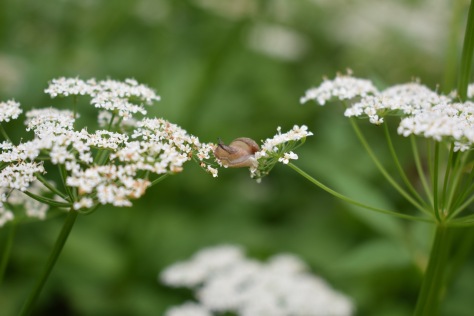 Bit by bit, it moved forward, committed to its path. I held my breath, wondering at the outcome, marveling at the snail’s unhesitating flowing movement forward. Slowly, but surely, the two blossoms came closer together as the snail manipulated them, its body bridging the gap between them.

In a surprisingly short amount of time, the snail was clearly entrenched on the second blossom.

It’s actually going to make it.

As the snail moved forward, the previous perch released and swung back to its original position. The snail continued onward. I sat back on my heels, dumbfounded. I considered how far the snail must have already come and how far it must be going. I marveled at its steady path forward across daunting, seemingly impossible, barriers. 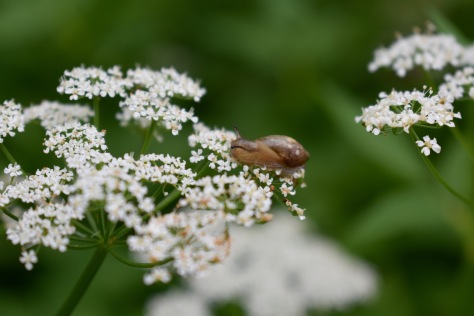 Just look at the distance between those two blossoms! Look at the length of the snail’s body! Incredible, right?

Before this moment when I stopped to watch its journey, I would have said it was impossible.