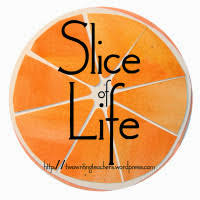 The storm came in quickly. A typical late summer afternoon thunderstorm, powered by thick heat and humidity. The clouds rolled in, trees twitched and swayed and the heavens opened to release torrents of rain. The temperature dropped, dropped, dropped. Ahhhhhh!

Safe inside, we watched the rain pattern the windows and splatter the earth. I puttered about in the kitchen, hoping the storm would last long enough to soak the parched gardens.

About 15 minutes later, dinner was just about ready and the downfall was easing. Rays of sunlight pierced the clouds from the western sky, transforming rain droplets to crystals.

“Oh! Look! There’s got to be a rainbow out there!” I announced. “I’m going to see.” I quickly dumped the gnocchi in the colander, and turned off all the burners.

“I’ll look out front,” Lydia called as I raced out the garden door, headed to the driveway. Both of us were heedless of the falling rain, busily scanning the skies.

Wait….is that one? No…. Over there? Just over the trees? The faintest tint of color at the top of an arch? Yes? YES!

“I see one!” I shouted. “There’s a rainbow! You can barely see it, just over the trees!”

Lydia rushed over to join me in the driveway and I pointed.

“I’m driving down to the river to see if I can see it better there,” I announced. “Want to come?”

Within a minute or two, we’d dropped everything. I had double checked that the burners were off, thrown a dishtowel over the steaming gnocchi, and grabbed my camera.  Dinner could wait. The three of us jumped in the car and headed down the driveway.

As soon as we turned onto the road, our view opened up and we saw it.

The sky was lit with the full arc of a rainbow, the colors dazzling and bright. We chattered excitedly, pointing as the rainbow shimmered and glowed.

“Wait! There’s another one! See! It’s really faint but it’s there! Oh my gosh!  It’s a double rainbow!”

We continued down to the river, making admiring comments all the while.

We pulled into the parking lot at the river park, and jumped out to join several others who were there, heads angled toward the sky, cameras snapping. Everyone was smiling. 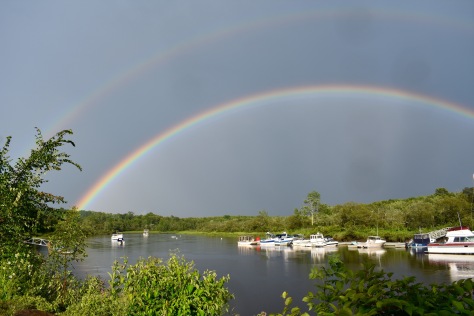 After several moments and several pictures, I looked back to realize my car was parked haphazardly, halfway in a spot, halfway in the middle of the lot. I looked around and noticed other cars similarly situated. I pointed this out to another spectator (and poor parker), and we laughed together. Clearly we’d all been too excited and distracted to park properly. Isn’t that wonderful?  It reminded me of a poem by Maggie Smith “Poem Beginning with a Retweet” and these lines,

“If you drive past horses and don’t say horses
you’re a psychopath. If you see an airplane
but don’t point it out. A rainbow,
a cardinal, a butterfly. If you don’t
whisper-shout albino squirrel! Deer!
Red fox! If you hear a woodpecker
and don’t shush everyone around you
into silence.”

I want to be with people who drop everything to chase rainbows. Who point out the beauty in our world and who stop to pay attention. When I’m feeling down about how people are acting in the world or overwhelmed by the barrage of news, I’m trying to remember moments like this. The spontaneous rush to search for a rainbow. The heady feeling of delight as we caught sight of the full double arc. The moment when so many of us, after the storm had passed, lingered in a parking lot, enthralled by the sight of those two glorious rainbows dazzling in the sky. Smiling together. Connected.