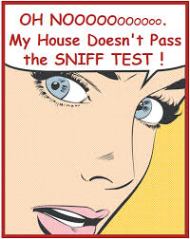 Our house smells like death.  Even after a long day at school, it’s hard to get excited about coming home when a miasma of decay smacks you in the face as soon as you open the door.  Foul.  It is indisputable.  Something is rotting.  What creature died in these walls this winter?

“You should check the basement,” Kurt says.

Last night, fortified with a glass of Malbec,  I opened a few cupboards with trepidation.  “Why would it die now?” I ask him.

“I think maybe it died this winter and now it’s finally getting warmer outside.”

On the upside, it’s not too bad once you’ve been inside the house for a while.  “Is it a good or a bad thing that we can adjust to the smell of death?” I wonder aloud. Kurt just looks at me.

The weekend is here.  Should I add “look for the dead body” to my growing to-do list?  It’s not-so-surprisingly hard to get motivated to go corpse searching.  Odds are the body is inaccessible, lodged in a crawl space or even in the walls.  So, I’m probably doomed to failure before I begin.  And I know from experience that this is one of those rare problems that will eventually go away if we ignore it.  Time is our ally.  Eventually.

For now I’m just thankful that we’re not missing a cat.

One thought on “The Big Thaw”